Since 1992 we have now and then re-released some classical recordings from the vinyl-vault. So far we have released Rasta Hunden, Krunch and The Kristet Utseende and two compilation-albums covering some of ours (and others) classical punk recordings from 1978-1982. Vägra Raggarna Benzin Vol. 1 & 2, Punk från Provinserna 1978-82, which in the future will be completed by Vol. 3 - the lost singles and unreleased tracks from the early Swedish punk outside Stockholm and Gothenburg. During 2003 we celebrated that it was 10 years since the release and released Left Hand Solution and Garmarnas debut-EP's remastered with bonus tracks as full albums.
To top that you can find all the 10 first Massproduktion singles on Punksvall 1979-80. A CD that even got nominated to a swedish Grammy. In 2007 we released a Traste & Superstararna compilation that received fantastic reviews.
Celebrating the labels 30 years in business we released a compilation with Swedens first all girl punk band - Mögel (1978-83) in 2009. In the works is compilations with Vacum and Massmedia.

RASTA HUNDEN
This local reggae-punk-pop group existed for only one year, hardly played outside Sundsvall and released only one album and broke up shortly after, but still is one of Massproduktions big sellers. Their humorous lyrics, with a whole gallery of short portraits of local figures and sing along tunes is still finding new audiences. The CD also includes two previously unreleased live tracks.

KRUNCH
Another of Massproduktions big sellers. Krunch from Timrå, a small municipal town close to Sundsvall, was one on the most important Swedish punkband of the mid-eighties and met a large international interest. They toured Europe twice but at that time interest for punk in Sweden was at it´s lowest level. Which did not stop them from having a small but very devoted following. High speed punk with neck breaking turns and lyrics who could have been written with by Majakovski on lust gas made them to something special. Not to mention their liveshows...This CD includes all their recordings, except for the first Hello Bob EP. The band also finished the six tracks that would have been their last mini LP where they ended in 1989. So the album includes four previously unreleased tracks and two remixes.

THE KRISTET UTSEENDE
To really understand what these weirdos really are doing you must understand Swedish and have a large potion of somewhat perverted humor.
The Kristet Utseende is created from the belief that just in the outskirts of Gnarp there is a Christian sect, totally devoted to perverted sex games, drugs and scandalous living in general. From this beliefs, all of their lyrics origin from and mixed with their punk and metal influences it makes a blend that don't have a comparison in Sweden.

A new collection of old brilliant punkhits from the early days of Swedish punk. Some of them banned from the radio but played anyway by Ny Våg - the black sheep of the national radio and a must for those who were interested in what was happening around in Sweden at that time. Vol. II contains:

Massproduktion celebrated 10 years since the first LHS-record by re-releasing their first 7-track EP "Shadowdance" as an album with 5 bonus track - three of them never released before. This is a almost complete document of the time when Kicki Höijertz was the vocalist. It have been carefully digitally remastered, showing the full beauty and thundering force of their early days.


Listen to the album at Spotify

GARMARNA celebrates 10 years as a 5 piece band and to honor that we have released their first 7 track EP remastered with 6 bonus tracks done during the bands period as a trio. A great introduction to the roots of the band and an impressive record by a very young band. Emma Härdelin is 16 years old...

PUNKSVALL
Contains all the punksingles from Sundsvall released during 1979-80. Most of them impossible to find nowadays. 39 songs in 79 minutes, remastered and with extensive liner-notes (only in Swedish). Listen to legendary tracks from MASSMEDIA, VACUM, FÖRBJUDNA LJUD, PIZZOAR, INVASION, BRÄNDA BARN, THE SAME and DIESTINCT. 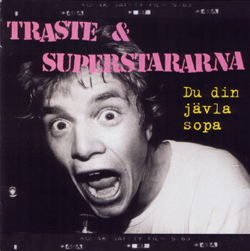 Traste & Superstararna (Trush & the Superstarlings) was an important band in the early Swedish punkdays and their first single Pengar/Traktor is still a classic. This collection gathers all their classics and many prevously unreleased tracks. All in a great cover designed by Traste himself. 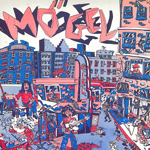 MÖGEL
Mögel was one of the most original bands that came out of the first wave of punk in the late 70-ies. Swedens own equivalent to The Slits. During four years of existence they made several hundred gigs all over Sweden and also Belgium, France and Czechoslovakia and were as popular with the local punk heroes as with Fred Frith. They made Radio Theater with Ingemar Bergmans favorite actor Erland Josephson and TV-documentaries with the legendary Ebba Grön and KSMB. The record cover was done by Olivia Télé Clavel from the Bazooka group who designed a lot of legendary punk records (Iggy & The Stooges Metallic K.O. etc.) and almost single handed designed the French punk. The record was recorded in France with Ferdinand Richard from Etron Fou Leloublan producing. Ulrika, who sang, was one of the three hosts of the only radio program playing punk at that time in Sweden – Ny Våg – which caused a lot of outrage among the people of good taste.

Now it’s time to finally celebrate Mögel as the groundbreaking band they was. 1978-83 enclosed their only record, a six song-MP, and their two songs from a cassette and six never before released songs that shows the strength and integrity of Mögel.